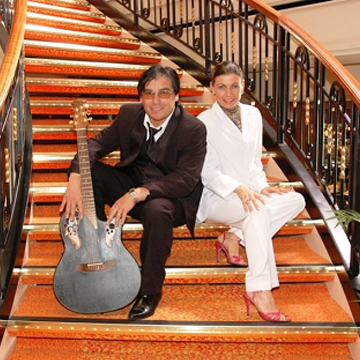 SAVE THE DATE: Friday May 26, 2017
Jose and Patti Davila present the “Kings and Queens of Rock and Roll” show. For many fans of Rock and Roll our principal sources of music often consisted of transistor radios, record players and television shows. Do you remember 45’s and LP’s? Jose and Patti Davila return to the Palace Theatre for their third consecutive year to provide us with an exciting and powerful look back to the many songs which defined a generation of fans of Rock and Roll. This show will be a true celebration of the best of the best! In their own unique style, Jose and Patti, backed up by a seven piece band, will perform timeless classics such as Johnny Cash’s “Ring of Fire, “ The Mama’s and Papa’s “California Dreaming,” Carole King’s “Tapestry,” Neil Diamond’s “Hot August Nights,” and many, many more. These world class entertainers never disappoint an audience. Their stage presence is brilliantly polished yet intimate. They have performed in venues all around the world. Come experience this incredible show and like so many of their thousands and thousands of fans, you will want to have them back next year. This year’s show will offer a unique bonus. The “Kings and Queens of Rock and Roll” show will open with an appearance by acclaimed comedian Joe Yannetty. Joe’s many credits include acting and writing for television shows. He has also appeared at the Circus Maximus Showroom, Caesar’s Palace, Radio City Music Hall and the Kennedy Center.